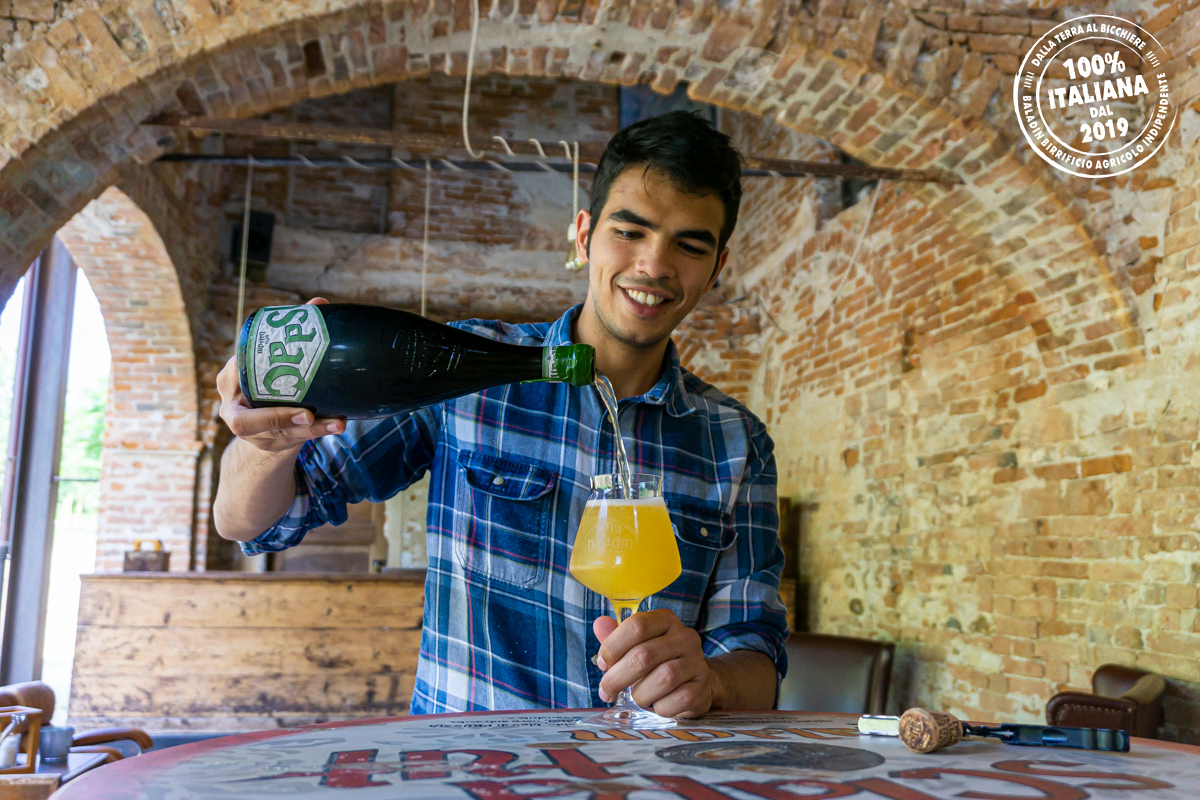 In Baladin’s production philosophy, spices have always had a prominent role. It is not by chance, then, that Isaac - one of Teo Musso’s very first creations - took inspiration from one of the most renowned “spiced” styles in the world: Blanche beers (also called Witbier). This is a Belgian style, which stands out for being light, refreshing, and with a bold and peculiar aromatic profile.

Isaac was the second beer brewed and sold by Baladin and was created in 1997, just a few months after the pure malt iconic Super. It takes its name from Teo Musso’s first son and, with its fresh and subtle citrusy scents, it tries to evoke the Mediterranean sun to express the incredible joy of Isaac’s birth. This is the beer that started Baladin’s lucky range of aromatic beers. With time, it has grown with the addition of many intriguing recipes, like Wayan (a Saison with nine different spices) or the Christmassy Nöel (made, over the years, with cocoa, coffee and licorice). With Isaac, Baladin started a journey that would lead to one of the distinctive characteristics of its production approach.

More than spices: the use of yeast

It would be a simplification, though, to think of Isaac as “just” a Blanche beer and only focus on its spices. First of all, because Teo Musso has always tried to move away from preconceived labels and categories to freely express his creativity. He has worked extensively on yeasts, which are often the starting point to determine a specific beer style, both in terms of definition and organoleptic features. Although Isaac is generally considered a Witbier, it does not contain the classic Blanche yeast strain. Even if it is very similar to its reference style, it can certainly boast a unique character, as is typical of Baladin beers. This is true for many other beers by the Piedmontese brewery, such as Wayan or Elixir.

In light of these production strategies, it’s easy to understand why Isaac’s aromatic profile is reminiscent of a Blanche, despite some organoleptic differences. In terms of aromas, for instance, we can find smooth touches of almond, which come from the specific yeast used in the recipe. The cereals can express their character, as they are not overwhelmed by the classic profile of Witbier beers. The use of spices, instead, is pretty consistent with the classic reference recipe, with a little "poetic license”. In addition to the traditional coriander and bitter orange zest, Isaac also contains sweet orange zest, which make the citrusy notes more gentle and richer.

The most important characteristic of Isaac, however, is its innate “Italianness”. For Baladin, it was the first attempt to develop a beer with a truly Italian identity.

Since the first time it was brewed, Italian Pils malt has been used, along with wheat grown by Teo’s father. The wheat used was an old wheat variety, and was later reproduced in the brewery’s fields using its seeds. The process was completed at the beginning of 2019, when Italian grown hops were finally added to the recipe. Now, all the ingredients come from Italy, including coriander and orange zest. Isaac has always had a strong national identity, but now we can officially consider it a 100% Italian beer.

During its long evolution, the recipe has undergone a few minor changes, which have allowed Isaac to adapt to the passing of time. In addition to the different origin of some ingredients, hops are now used more generously. The variety used is Cascade - grown in Piozzo (CN) - which gives gentle peppery and citrusy touches. Of course, these changes impact on the taste too: the bitterness is slightly stronger and balances out the sweet component, which is quite significant in this beer.

With a straw-yellow color, Isaac is slightly hazy, with a fine and moderately rich head. The scents are of course influenced by the aromatic ingredients, with spicy and citrusy notes and gentle phenolic touches which come from the almonds. The taste is generally sweet, as well as balanced. The body is runny, but with a pleasant texture, thanks to the use of wheat. In the aftersmell, the citrusy and spicy notes melt with delicate hints of flowers, herbs and cereals. Isaac is easy to drink, thirst-quenching and light, yet with a bold character which makes for a very rewarding drink.