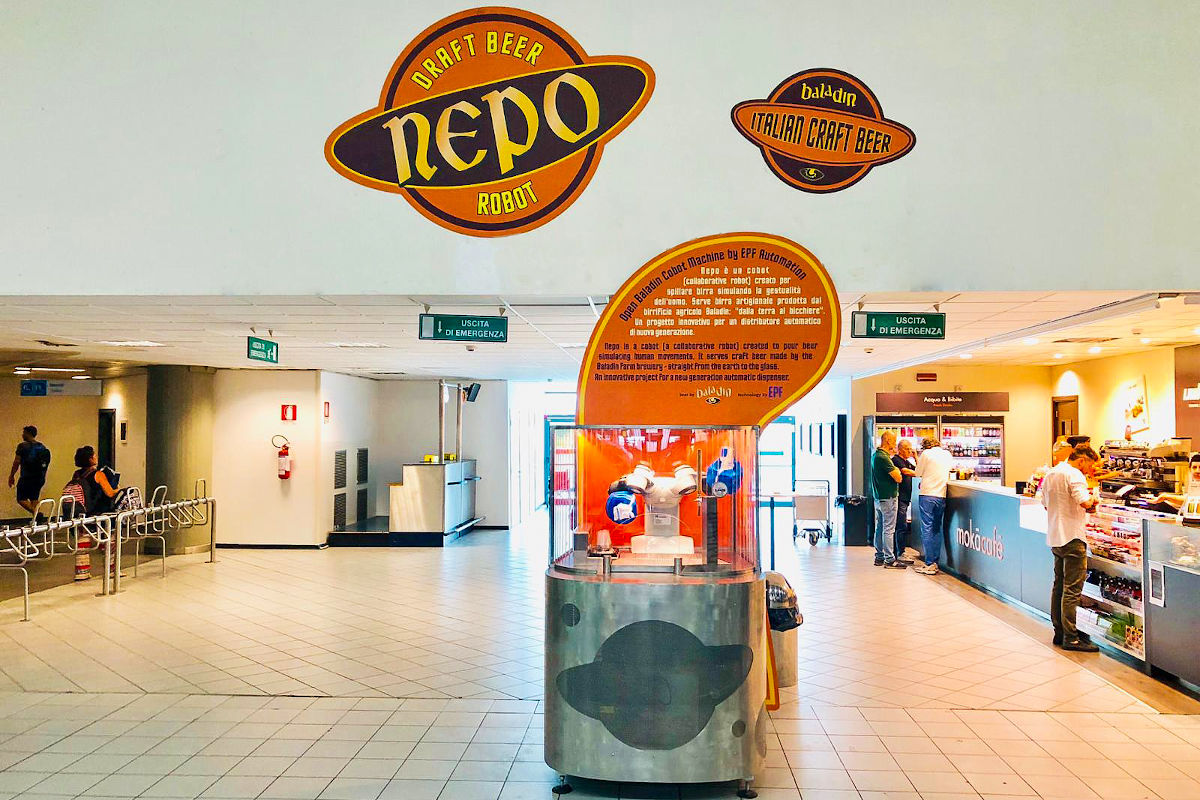 Nepo is a cobot (a collaborative robot) created to serve beer simulating human movements. It serves craft beer made by the Baladin farm brewery: “from the earth to the glass”. An innovative project for a new generation vending machine.

Where: NEPO is launched today (July 10th) for an experimental period in the check-in area at the Caselle airport in Turin.

The birth of the idea:

Baladin is a farm brewery and a pioneer of craft beer in Italy. It was founded and has grown in Piozzo, facing the Langhe region. EPF Automation works in the automation industry and is based in Carrù. As it sometimes happens, when different worlds and the ingenuity of people meet, innovative ideas pop up in unchartered territories.

A few years ago, Teo Musso, Baladin’s founder and master brewer, was contacted by his friend Franco Filippi, owner of EPF Automation. He told Teo about a rather bizarre project he had in mind, and Teo was immediately intrigued. Franco’s idea was to use the most recent technological evolutions in the field of robotics - which are normally applied to industrial processes - for a completely new purpose: serving draft beer.

Teo was asked to offer his experience as a publican, i.e. someone who knows how to serve beer, and an expert with a deep knowledge of the world of beer, to define how to develop the idea and communicate it without being misunderstood. Together, they decided to include the initiative in the OPEN project, which Baladin often experiments with.

The robot prototype was developed following the Open philosophy. It is intended as an instrument to serve beer in those places or contexts where you having human staff would not be effective (high traffic areas, such as stations of airports), and to make beer available even at odd times.

Once the idea was shared, EPF Automation started to work on the prototype and involved Baladin to fine-tune the technical aspects. The project was also the topic for two dissertations at the Polytechnic of Turin.
The result is NEPO, a “beer serving robot” that can draw a perfect pint of beer.
It is supported by a Web interface where users can find information of the product characteristics and provide feedback for the further development of the project.

An innovative project, developed by creative minds from Piedmont which, we hope, will leave the world in awe and help spread the knowledge on craft, independent beer.