Types of Beer: Ale or Lager? 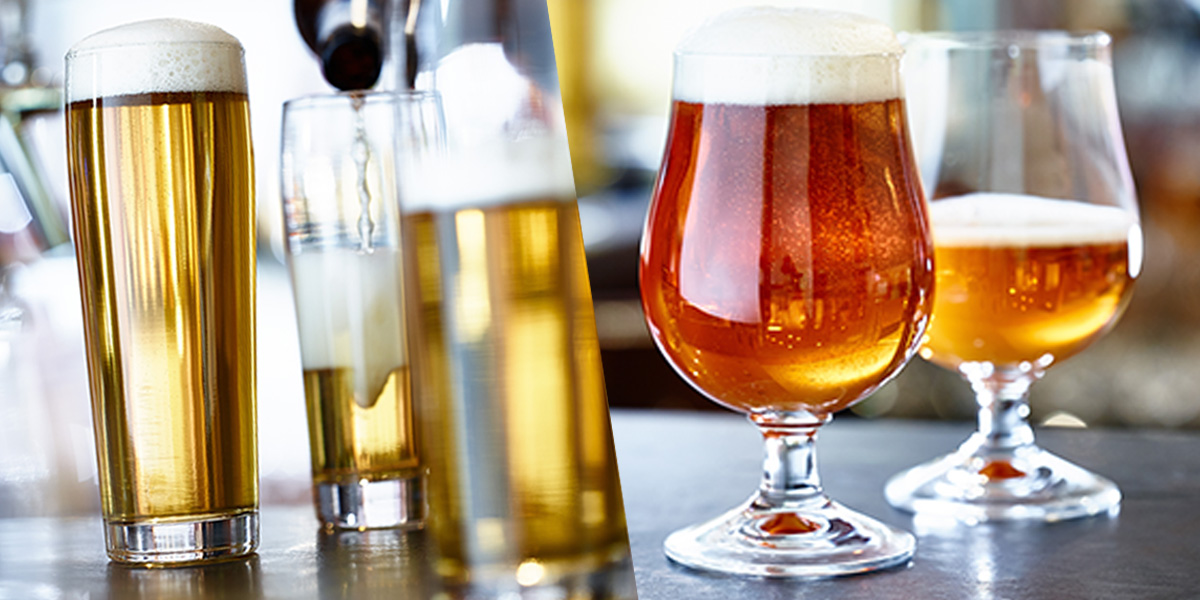 Usually, people who approach the culture of beer for the first time are not aware of the great variety of this drink. Thousands of different types of beer exist in the world and have developed around the social, economic and cultural habits of the places they originate from.

Although the existing types of beer are many and very different, they can all be subdivided into two large families: top-fermented beers and bottom-fermented beers. The distinction is based on the type of yeast used in the brewing process, but each family also shares some organoleptic peculiarities.

Top-fermented beers - or ales - are obtained from Saccharomyces cerevisiae yeasts. These microorganisms work best between 12 and 23 °C and, once exhausted, tend to rise towards the top of the fermenter (hence the name). They can have a strong impact on the taste and scents of the beer, as they produce esters, phenols and other substances that enrich the aromatic range of the beer with, among others, notes of ripe fruit, spices and flowers. Many top-fermented beers undergo a second fermentation in the bottle (or cask): at the time of bottling, the master brewer adds wort, yeast or sugar to activate a further fermentation process inside the container. This ensures a longer shelf life and refines the taste.

Great Britain and Belgium are the two countries that have historically brewed top-fermented beers. The United States have joined them much more recently. Traditionally, Anglo-American brewers use yeasts that do not significantly impact on the aroma of the beers, while Belgian beers are strongly characterized by the yeast. Most beer styles in the world belong to the family of top-fermented beers. It is the oldest of the two techniques.

Bottom-fermented beers - or lagers - are obtained from Saccharomyces pastorianus yeasts, previously called Saccharomyces carlsbergensis as they were isolated for the first time in the labs of the Carlsberg brewery. These microorganisms, which are considered a hybrid between Saccharomyces cerevisiae and Saccharomyces bayanus, work best between 6 and 13 °C. When exhausted, they sink to the bottom of the fermenter. Their metabolism is slower than high-fermentation yeasts, and their contribution to the aromatic profile is much more limited. In general, the production of lagers takes longer. For instance, it involves a long period of cold storage called “lagerization".

Almost all commercial beers now available on the market belong to the family of bottom-fermented beers, as it is generally easier to control their final outcome in terms of tastes and aromas. Germany is the country with the greatest tradition in lager brewing. Here, bottom-fermented beers have historically replaced top-fermented styles, with a few exceptions. Bottom-fermentation yeasts became commercially available only at the end of the 19th century. This technique is therefore much more recent.

To complete the discussion on the existing types of beer, it is also important to mention the very small family of spontaneously fermented beers. They differ from other beers because it is not the master brewer who injects the yeast. In other words, their fermentation is not artificially induced, but is the result of the spontaneous “fertilization” of microorganisms (yeasts and bacteria) found in the air. The region that is the symbol of this ancient production technique is Pajottenland, south-west of Brussels, between the Senne and Dendre rivers. The spontaneous fermentation style par excellence is Lambic.

Despite the wide variety of beers, it is quite astonishing to realize that the many different styles can be traced back to only two large families, with the exception of the spontaneous fermentation niche. This broad subdivision helps us to draw some general conclusions on the type of beer we have in our glass, guiding us through the tasting. The fact that this difference is based on the yeast used emphasizes the importance of this ingredient, which has a much more relevant role than is normally assumed.