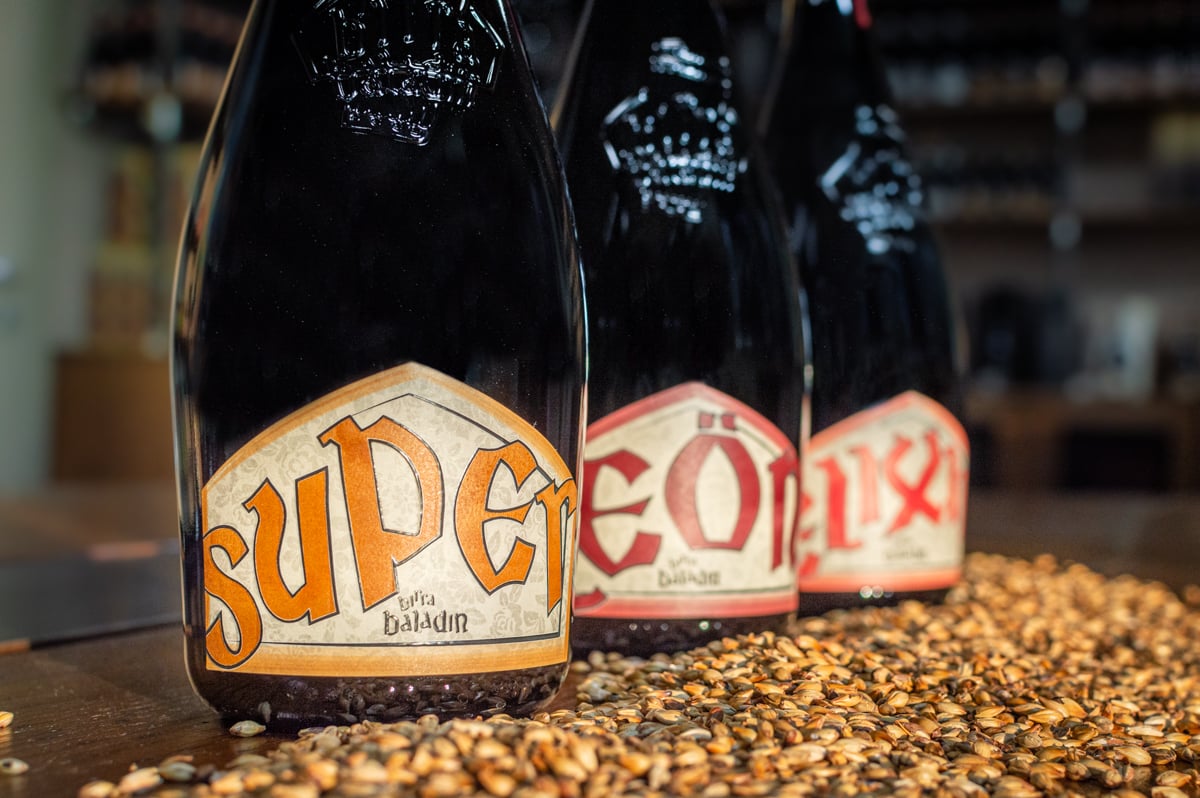 In the endless beer landscape of Belgium, we find a family with blurred borders which includes an extremely high number of products. We are talking about Belgian Strong Ales: strong, top fermented beers with a rich and complex aromatic profile, where yeasts play a primary role. The criteria that define this family are rather loose: it includes very different products in terms of color, organoleptic profile and additional ingredients.

The Baladin brewery in Piozzo (Cuneo) has always looked at the Belgian beer-making tradition, reinterpreting its styles in a very personal manner. It does not surprise, therefore, that some of the most representative beers by Baladin belong to this group: Super, Elixir and Leön. And it is no surprise that these beers, although they share a common denominator, are very different.

Super (8%) was the first bottled beer produced by Baladin back in 1997. It can be considered as one of the most influential Italian craft beers, not just because of its intrinsic characteristics, but also for its packaging. It was the first beer to be launched on the market with such a refined bottle and a graphically elegant label.

Teo Musso’s idea was to create a beer that could be paired with food, especially with strong cheese, with a cheeky reference to wine. At the time, this was a visionary and revolutionary idea. The name “Super” was chosen as a sort of self-encouragement to reach this ambitious and lucidly crazy goal.

Teo Musso’s idea took the form of an amber Belgian Strong Ale, built to bring out the malt and yeast components. The malt gives Super its decisive sweetness, as well as some touches of caramel and cookies. The yeast completes the bouquet with notes of “warm” fruit (cooked apple and plums), a light touch of candied orange and, most importantly, hints of almond paste, vanilla and licorice that come from the phenols.

The amazing thing about Super is that its recipe has never changed through the years. It has always stayed true to itself even if the world of craft beer has  deeply changed in the meantime, as well as the taste of consumers. But this has not eroded the success of a product that is still a benchmark for the Italian beer movement.

Elixir: the beer of passion

Elixir (10%) was created when Teo lived an intense love story and tried to convey the same, enthralling passion with a beer. The secret of Elixir is a yeast strain that had originally been used to make whisky and had been adequately changed over time. Teo’s first experiments with this ingredient date back to the first 1990's. Over the years, he has perfected its use. The same strain is now used for other important beers by Baladin, such as Xyauyù and Nazionale. Some of the original features of the yeast have been preserved over the years. In particular, it works at relatively high temperatures and is able to metabolize most complex sugars, thus creating very dry beers. In terms of aromas, it gives a delicate scent between peaty and smoky notes, which is typical of the beers where it is used.

Elixir tries to find a balance between the sweetness of the malt and the final dryness, playing on the attenuation ability of the yeast. The yeast also gives notes of fruit in syrup, melon, citrus fruit and white chocolate, which blend with the biscuity notes from the malt. It is extraordinary when paired with hefty meat dishes or blue cheese, and is surprisingly good with fruit ice creams.

Leön: from Christmas to the rest of the year

The origin of Leön (8,5%) is also quite peculiar, as it was originally developed as a Christmas beer. Its name is the anagram of Nöel, the beer launched by Baladin in 1998 for the Christmas season. Thanks to its rich and complex aromatic profile and because it is so easy to drink, Nöel was incredibly successful. This convinced Teo Musso to transform it from a seasonal beer to a product that is now available all year long.

It was 2011, and that’s when Leön took its current name. Leön is a feast of dried fruit, caramel, sultanas, plums under spirit. It is gently warming and elegantly intriguing. It would be such a shame to drink it only at Christmas!